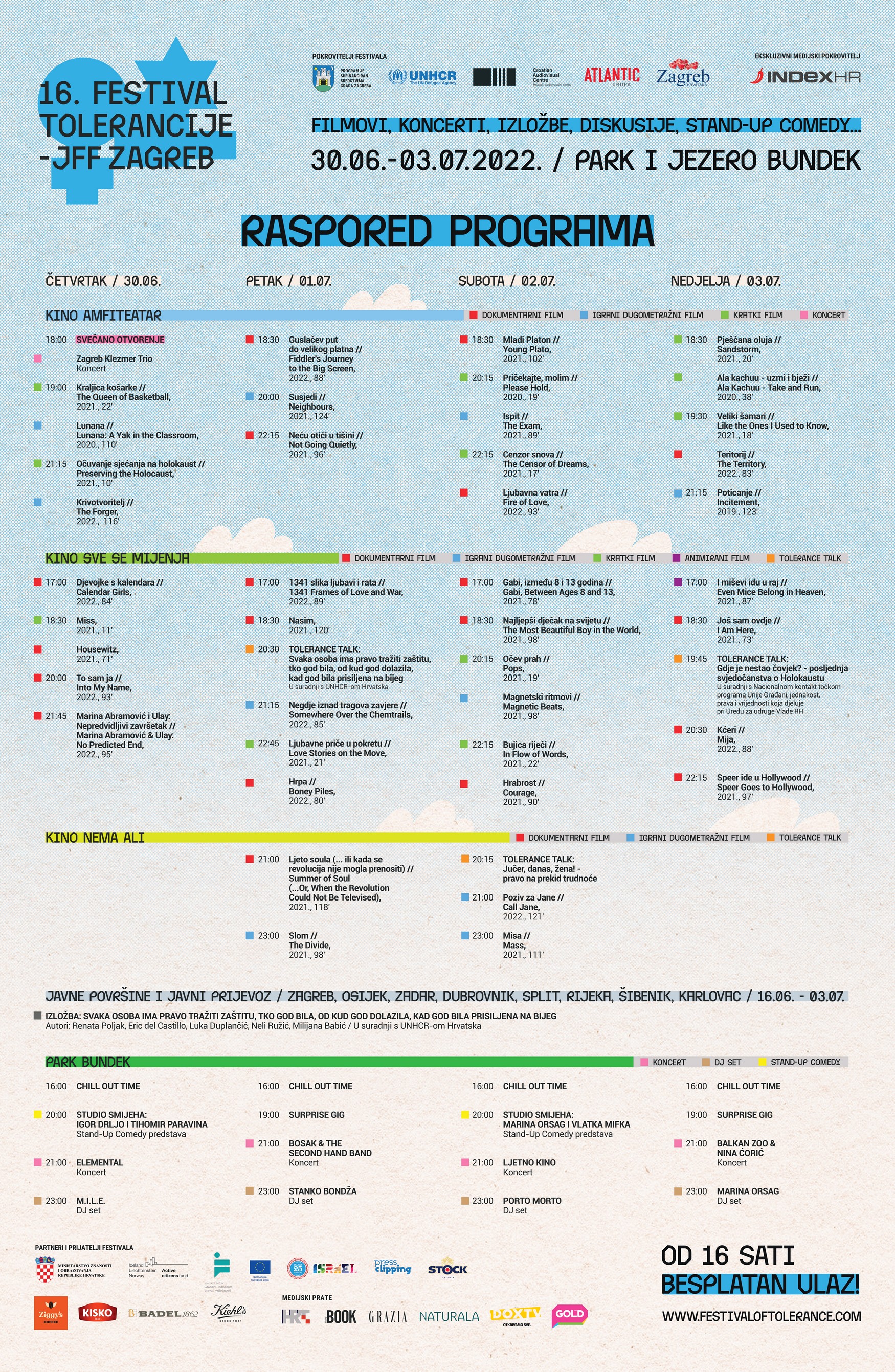 Selectors of the film program of the Festival of Tolerance are:

The Queen of Basketball

Lunana: A Yak in the Classroom

Fiddler's Journey to the Big Screen

Somewhere Over the Chemtrails

Summer of Soul (...Or, When the Revolution Could Not Be Televised)

Love Stories on the Move

The Most Beautiful Boy in the World

The Censor of Dreams

In Flow of Words

Even Mice Belong in Heaven

Ala Kachuu - Take and Run

The Film Program of the Festival of Tolerance traditionally consists of current films screened at the world's most important festivals (Cannes FF, Berlinale, Sundance FF, Karlovy Vary FF, Mostra) and awarded with the world's most prestigious awards (including Oscar-winning titles). In selecting the program, special care is given to high-quality films that are most often unavailable in regular cinema.

In addition to artistic value, the films stand out with socially relevant topics, dealing with the problems of minority groups, people with special needs, environmental issues, etc. Films are often opening space for deeper reflection and discussion, either with filmmakers or experts in relevant fields. In addition to current social phenomena, the films also deal with the Holocaust.

The Spectrum Program represents a selection of current globally significant feature films on the topic of the Holocaust, human rights and current social problems. The Spectrum Program hosts films of high production standards that are both easy to understand and highly attractive, i.e. intended for a wide audience. In the selection, particular attention was given to films from the so-called film festival circuit awarded at prestigious festivals.

The thematic context of the Festival of Tolerance dictates the selection of films on the topic of the Holocaust, human rights and other key contemporary as well as historical social problems. As such, the Festival’s programme would be unimaginable without documentary films. The program named Reality Bites highlights the quality, immediacy, measure and power of a good documentary with the aim to show the global dimension and universality of individual issues.

TOLERANCE ON THE EDGE

Films from this section are characterized by a strong auteurial stamp; they are controversial, often raw and ruthless, but most importantly: utterly original and powerful. Tolerance on the Edge is a new program of the Festival of Tolerance, which turns to arthouse, hybrid but also genre films, i.e. films whose stylistic and content features do not fit in the usual mainstream festival programming.

All of the above, apart from the length :) Traditionally, short films are always screened before the feature length films.

Important part of the audience for the Festival od Tolerance are children - big or small they'll find a film or two for their amusement and education.