On April 1, the streets of Zagreb will be host to the photographic exhibition Oni // They. From April 1 to April 15, pop-up installations will be set up on four squares of the City of Zagreb (Ban Jelačić Square, Preradović Square, Square of the Republic of Croatia and the King Tomislav Square), showing portraits of four refugees from Syria, Iraq and Iran, who are currently living in Croatia.

At each individual point, four portraits of one migrant by different photographers will be exhibited. Prominent Croatian artists Ana Opalić, Mare Milin, Stanko Herceg and Ivan Posavec will show us their vision of four exceptional people from Syria, Iraq and Iran and their tragic life stories.

It is hard to escape the call of Emmanuel Levinas’s philosophy when we are confronted with another person’s face, no matter if he/she is presented alive or, as in this case, in a photograph. This is especially the case now, when the otherness reignites global malaise. Levinas’s main thesis is that any kind of thinking is primarily ethical and it emerges in the moment when we are confronted with another person’s face. Namely, in that particular moment any totalling or rational system to which we are accustomed to describe the world simply becomes inadequate. When confronted with another person’s face, we experience the crisis of individuality. That is the same crisis that Freud called a “cultural discontent“. It is not about the fact that culture imposes boundaries to some, usually autochthonous, original self, which consequently feels discontent. No, we experience our own culture as something problematic, insufficient and perhaps even violent and cruel. To express it with Levinas’s words: “Everyone would readily agree that it is of the highest importance to know whether we are duped by morality.“

In other words, the difference stirs the impossibility of totalisation and opening to the infinity. The same face interpreted by different photographers seizes to represent itself. Various observations reveal a new face each time and thus a question arises: what is an original and how does the face of the Other actually look like? It is impossible to answer that question and therefore, the question gets transferred to the space of infinity, or endless representation. And if there is no original, what gives us the right to define, totalise or moralise the Other?

There is another name for the infinity inspired by another person’s face – a regard or a gaze. More than any other medium, photography is founded in that concept. Jaques Lacan defines the gaze as a space lying hidden behind the image but remaining necessary for it to exist. Light is such a matter. It allows reception of reality; without the light we are unable to see, yet we can never really see the light itself. Even the natural sciences are equivocal when it comes to light - it is a wavelength and a particle at the same time. The gaze remains hidden and empty; one needs to seek Levinas’s infinity in it. The elusive matter that remains concealed, and invisible is the reason for the endless variation of the visible. And where but in photography should one find that would scrutinise the role of the spectator and his or her perspective?

The photographs installed at frequent locations were created with an intention to induce malaise and an escape from everyday life and to impose an obstacle not only to physical movement but also to thought. Instead of the familiar failure to question and to perceive spontaneously, the photographs of “them should interrupt the continuity. “They” turn out to be a portal mirroring our image, or at least the image we have about ourselves. The regard becomes an unquestioned part of our own existence, belonging or identity. People in the photographs will not become “us”, nor will we become “them” and the barriers are solid, impenetrable and fenced off by barbed wire. An abrupt break through the wire, that myth about the sameness, equality among people and knowledge about the other shall not untie the knot of differences. It shall merely conceal the malaise and helplessness. And even if we have compassion for another person’s destiny, the side effect of elevated emotions that give us an illusion of doing something important, has the same result as fear – we tend to shut down when we are confronted with another person’s face.

Torn between two equally devastating options of totalitarization, i.e. the humanitarian and patronising one and the aggressive and repulsive one, “they” open a range of possibilities to create the third option. Something that might give hope that finally we will be able to receive the message they emanate is the fact that our societies are not undergoing such changes and such a process for the first time.

Cities are places crowded by the others or “them”. The city is a place where diversity and time discontinuity dwell. When it evolved in the form that we know today, it was built on the foundation of immigration coming in from various other places. People fled their homes and rushed to industrial centres where they met strangers. Together with those strangers, they created a social infrastructure that we call a nation. Is there not a paradox in calling “them”, or the immigrants a threat to the nation if the nation itself is full of strangers? Not a single member of the nation will be able to meet all other members of the nation – they shall remain strangers forever. And that is the basic idea behind the logic of the nation since in any other case there would be no nation at all – as long as we are strangers to each other, the nation exists.

So, why is it impossible for “them” to become “our” strangers? Where is that moment, or that trace of a difference that shall forever keep them afar? That is the void and infinity evoked by another person’s face, or the understanding that we do not know and that we are not certain what is it that makes us members of a particular nation. That form of uncertainty results in aggression. And was it not that on several occasions throughout history various regimes tried to impose biological foundations of the nation in order to “objectively” exclude “them”? All those attempts failed but nevertheless all of them produced many victims, symbols of their own fear. And perhaps we forgot too quickly what is the engine of genocide - the impossibility to accept one’s incompleteness and fragility and blaming the other for that state. From the Shoah to Rwanda and Srebrenica, we follow the same logic. As soon as the other is too similar, too close, unrecognisable, speaking the same language, having a similar culture, there will be more aggression and violence against him/her.

The third space, or the place where “they” and “we” dissolve in a new identity does not arise from learning the story about the other, or from jumping over the wire. The third space implies to create a society that is inclusive and embraces diversity. The society that inscribes diversity in its own identity. Neither binary category can survive that process, not “them” and not “us”. “They” will continue to live life after the previous one had to suddenly end. There is no return to the previous life, not even if they physically return. “They” live in a new language, in a new culture and that new culture reveals details about their traditions and experiences they have not known existed. In turn, “we” experience that new and animated life, as something that opens new potentials we have not known existed.

Let us make the images of others on the streets of Zagreb the first and humble attempt to create the third space where boundaries between the original and the copy are erased. Let us embrace the message conveyed by the photographs: the original is just a consequence, just a sinister effect of constant transformation and not its precondition. By accepting the state where the original “they” or the original “we” ceased to exist, we can finally focus on “us”, a new social formation.

The exhibition is a part of the accompanying program of the Festival of Tolerance, organized under the auspices of UNHCR Croatia in collaboration with the Jesuit Refugee Service (JRS). Since 2019 the exhibition visited: 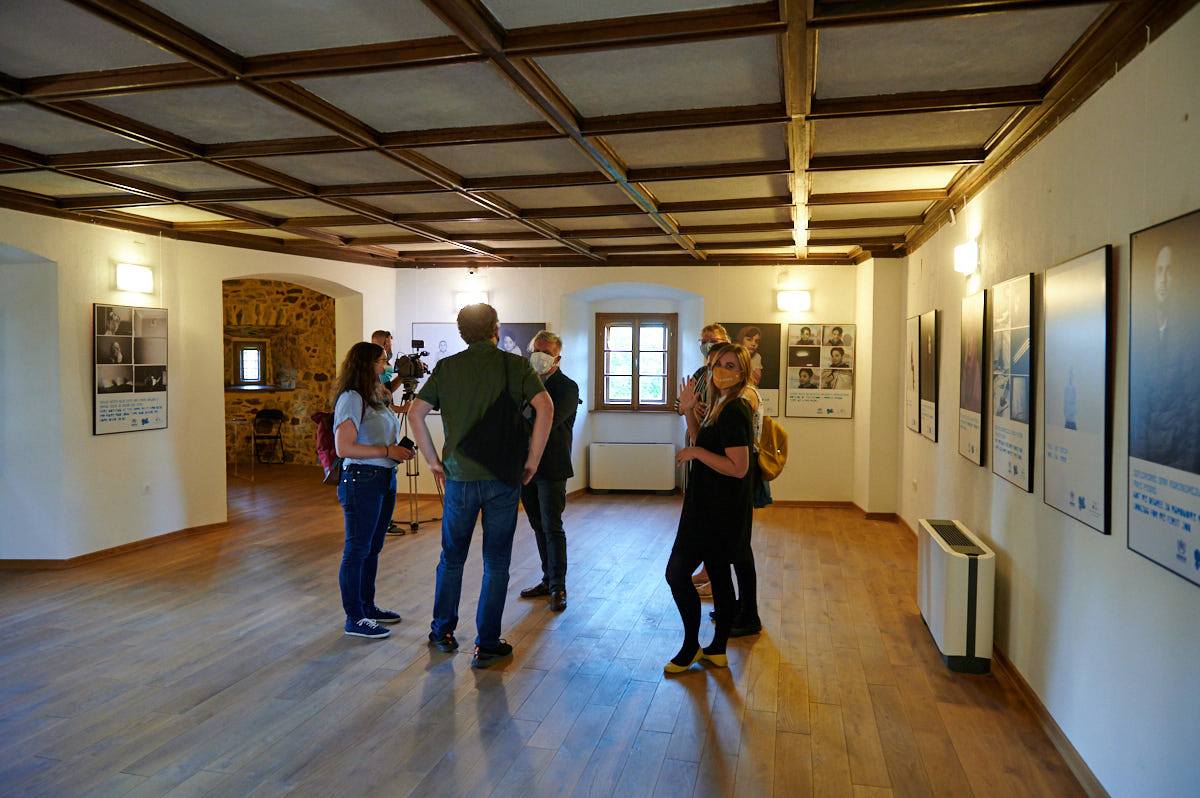